On the eastern outskirts of Naples is located at the National railway museum of Pietrarsa, one of a major railway museums in Europe.

Walking by the locomotives and the trains exhibited you may experience a fascinating journey back in about 170 years of history.
Originally these spaces housed the old Borboni iron workshop, opened in 1840 at the behest of Ferdinand II and transformed in 1845 into a factory of steam locomotives.

The Museum is located alongside the first Naples–Portici railway line, which was opened in 1839 and connected the two sites in just 10 minutes. Over the years 40 locomotives, 280 railway cars and a large number of boilers and other rolling stock were housed there. In 1853 with nearly 700 workers who worked there, it became the most important Italian industrial core. With the fall of the Borboni Kingdom, Pietrarsa passed to the Italian Government and the workshops were officially closed in 1975. 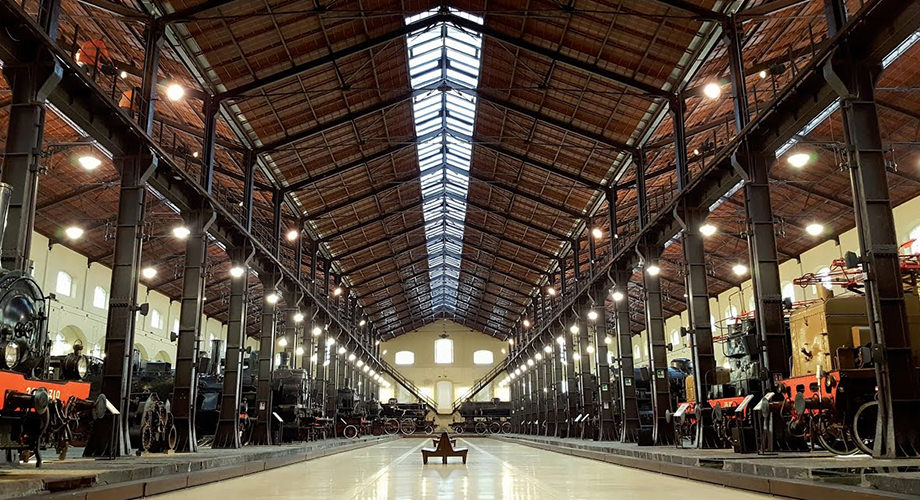 The Museum, opened in 1989, occupies an area of 36,000 squares, 14,000 of which are covered. It is divided into 7 pavilions where steam, electric and diesel locomotives are exhibited together with various types of carriages, plastics, furniture, and technological tools. Among the locomotives stands out the Bayard, the locomotive of the first journey Napoli-Portici, while among the passenger carriages, there is the beautiful Royal train, built by order of King Victor Emmanuel II on the occasion of the wedding of his son Umberto with Princess Marie José of Belgium. The latter is distinguished by the richness of the furniture, including the 8 meters long mahogany dining table around which about 26 people could sit.

In the external areas, you can admire a beautiful canopy of the early ‘900 in liberty style and a cast-iron statue of King Ferdinand indicating the place where the first workshops of the Kingdom of the Two Sicilies had to be built.

In this beautiful atmosphere, the Museum of Pietrarsa seems to be nestled between the sea and Mount Vesuvius, surrounded by a beautiful landscape. And with a little imagination, you can still hear the sounds of old locomotives combined with the smell of the sea, breaking on the rocks.