You are at:Home»Neighborhoods»Islands»How to go from Naples to Procida

To go from Naples to Procida you have to go to one of the piers of the city first. From Calata di Massa it is possible to take the ferry, from Molo Beverello the hydrofoil.

Molo Beverello and Calata Porta di Massa are in the neighborhoods of the Municipio metro line 1 stop. It is also possible to reach this area of the city taking bus number R2.

The journey from Naples to Procida by ferry lasts about 1 hour. By hydrofoil, the journey lasts 45 minutes.

To save some time and money, you can go to Procida taking the ferry from the port of Pozzuoli, a small town near Naples. The journey from Pozzuoli to Procida takes about half an hour. 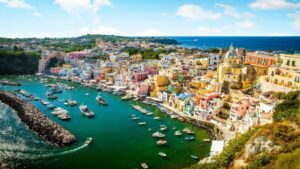 The companies to refer to in order to travel from Naples to Procida are Caremar for ferries and hydrofoils, and SNAV for hydrofoils.

What is the difference between ferry and hydrofoil? While on the hydrofoil is allowed only the transport of people, ferries also carry vehicles and heavy luggage.

Gestour, Medmar and Caremar are transports companies that offer the possibility of traveling from Pozzuoli to Procida.

If you want to go from Naples to Procida in Summer, it is strongly recommended to book tickets online, to avoid long queues that could even be useless!

Once in Procida, it is possible to take a bus to go to the main landmarks of the island. The bus station is in front of the ferries and hydrofoils port. Tickets, which can also be purchased on board, cost about 2 euros.