Napoli is rich in places where you can learn about the cultural aspects of the city. Among the most interesting ones stands out the Neapolitan architecture of which you can find several examples simply walking through the main streets of the city. Here is a brief guide to know 4 buildings and palaces where you can go to understand the wonder of Neapolitan architecture. 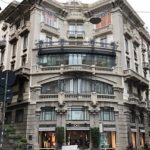 Palazzo Mannajuolo is in the elegant Chiaia district, at the corner of Via Filangieri and Via dei Mille. It is one of the most beautiful monumental historic buildings in the city and is famous for its helical staircase, filmed several times by great directors – the last example is Ozpetek with his “Napoli Velata”.

What is so special about this architecture of Napoli is that the architect was deeply influenced by 1600-1700 Neapolitan architecture. Even if he is a modernist!  Giulio Ulisse Arata decided to design Palazzo Mannajuolo declining neo-baroque local language in a new way. You can admire this encounter between old and new by looking at the façade of the Palace from the street named via dei Mille.

If you like to see more than 1 work by this italian architect, you can also see Palazzo Cottrau – Ricciardi at Piazza Amedeo 8, at few minutes walking distance from Palazzo Mannajuolo. 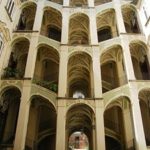 Palazzo dello Spagnuolo was built by Ferdinando Sanfelice, one of the most industrious architects in the eighteenth century in Naples. It is a great example of Neapolitan architecture in the Sanità alley and, like Palazzo Mannajuolo, is famous for its stairs. The stairs of the Palazzo dello Spagnuolo are hypnotic. Defined as “hawk’s wings”, the double ramp creates a real plot in the façade.

The main elements of Naples architecture are reachable in the style of this palace. It is pure Neapolitan baroque! You can see it from the importance given to the stairs, and in the symbols that are in the details. The doors that lead to the apartments are decorated with portraits of the family who used to live there.
In this district, legends of Napoli are everywhere… 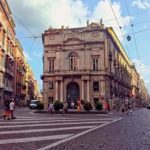 This building is one of the most sumptuous of Napoli architecture. It is in the heart of the historic center, along Via Toledo, in Piazza 7 Settembre. Originally there was another palace then demolished. Afterward, in the same spot, was built this palace designed by Luigi Vanvitelli, the sculptor and architect who built the Royal Palace of Caserta, and by his son Carlo.

It is difficult to access this building, that also is so ruined. But, on the outside, you can observe the fine marble and different orders combined on the same façade. If you success entering the building, you can admire the baroque and neoclassical decorations, and the geometric cloisters that really characterize this palace.

Palazzo Zevallos Stigliano stands out among the palaces of via Toledo. The particularity of this Neapolitan architecture is the large internal courtyard framed by a large eighteenth-century portal. Inside the majestic building, there are permanent and temporary exhibitions and concerts.

Since it is an ancient building that has been renewed several times, you can see ancient elements, such as stones, with modern structures made of glass and steel. Also, in the rooms of the upper floors, there is a permanent exhibition with paintings by the greatest artists of all time, just like Caravaggio!