You are at:Home»Napoli»Piazza del Plebiscito

Piazza del Plebiscito is the reference point for any tourist who arrives in the city of Naples and for its beauty, it is one of the first places where to stop. The 25,000 square meter Piazza del Plebiscito, located between the city and the sea, is the setting for contemporary art installations and the backdrop for important events, as the New Eve fireworks and the New Year’s Concert.

Piazza del Plebiscito is certainly the largest square in Naples and the most well-known abroad. The name of the square honors the 1860 plebiscite that ratified the unification of the Kingdom of the Two Sicilies to the Kingdom of Sardinia.

On the four sides of the square, there are four buildings. The church of San Francesco di Paola, the Royal Palace, the eighteenth-century Palazzo Salerno and the palace of the Guests, built-in 1815 to accommodate the guests of the Borboni.

The monumental basilica of San Francesco di Paola was erected by order of Ferdinand I. That, as a vote of the king to have regained the kingdom after the decade of the French domain. It was built taking as a model the Pantheon of Rome and dominates the square with its imposing neoclassical façade and the large dome decorated with rosettes of stone. 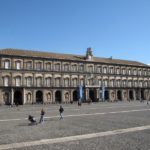 On the opposite side with the sea as a background, there is the Palazzo Reale, i.e. the Royal Palace. It is one of the four royal palaces of the Borboni, built-in 1600 by Domenico Fontana. The inside boats majestically decorated rooms and beautifully preserved furniture, paintings and porcelains. There is also a court theater and a chapel where is the permanent exhibition of nativity scenes.

Part of the building houses the splendid National library. There, you can admire important Herculaneum papyri and autograph writings of authors such as Tasso, Leopardi, and Vico. At the entrance of the palace, there are the statues of eight kings of Naples: Roger the Norman, Frederick II, Charles I of Anjou, Alfonso I d’Aragaona, Charles V, Charles III of Borboni, Joachim Murat and Vittorio Emanuele II.

In the center of the Piazza del Plebiscito two equestrian bronze statues representing Ferdinand I and Charles III of Borboni stand. If you want to play a game, you can try to pass between the two statues with your eyes bandaged! You have to start from the main gate of the royal palace. It is very challenging because of the slope of the square. How about trying once in Naples?