You are at:Home»Napoli»The Neapolitan 1600s exhibition

Are you looking for exhibitions to visit in Napoli? You can’t miss the chance of seeing the one dedicated to some of the most important Neapolitan and Italian painters at the Museo di Capodimonte. Here is what you need to know.

Until January 2023 you can visit the exhibition on the Neapolitan 600 “Oltre Caravaggio. Un nuovo racconto della pittura a Napoli”.

The exhibition is hosted in the 24 rooms on the second floor of the Museum and Real Bosco di Capodimonte.

“Oltre Caravaggio. Un nuovo racconto della pittura a Napoli” is an exhibition with 200 works from the permanent collections of the Capodimonte museum, without external loans.

The exhibition presents another key lecture of the Neapolitan 1600s, which has become the century of Caravaggio for amateurs and historians.

The Neapolitan 1600s at the Capodimonte Museum

By the 17th century, Naples had become one of the most populous megacities in the world exerting a profound influence on European culture. Its history is presented as a rich stratigraphy, made up of different civilizations, peoples, and artistic expressions that have left traces in the artistic and monumental heritage. For centuries it has suffered attacks, invasions, and destruction, facing numerous natural disasters: volcanic eruptions, earthquakes, tsunamis, and plagues.

From this point of view, we can explain the choices of the artists involved in this exhibition. Neapolitan artists drew inspiration from these contributions, reworking iconographies, compositional cuts, and use of lights in a completely personal way, exporting their language to Italy and Europe. An example among all is Luca Giordano (1634-1705), a champion of Neapolitan Baroque painting. 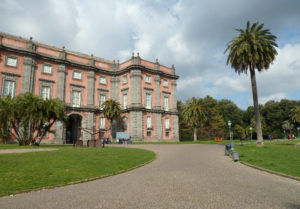 The Capodimonte Museum is in via Miano 2. It is open every day except Wednesday, from 10 am to 5.30 pm.
The cost of the full ticket is 12 euros. Admission is free for those under 18, and Artecard holders.