You are at:Home»Napoli»Don Quixote in Naples

You have time until September to visit the exhibition dedicated to Don Quixote at the Royal Palace of Naples!

The Don Quixote tra Naples, Caserta, and the Quirinale exhibition is an interesting reconstruction through a series of tapestries made by the Neapolitan manufacturer of the stories of Don Quixote. The tapestries date back to 1757-1779.

Don Quixote in Naples, an exhibition at the Royal Palace 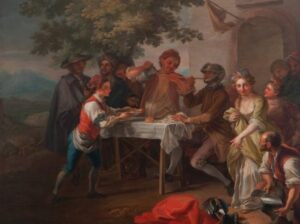 The exhibition “Don Chisciotte tra Naples, Caserta, and the Quirinale” follows the story of the novel by Miguel de Cervantes. The common thread was identified through the consultation of many sources. Among the many, the precious illustrated editions present in the National Library of Naples and the score of Paisiello’s work from the S. Pietro a Majella Conservatory in Naples.

In the Historic Apartment of the Royal Palace of Napoli, 7 tapestries are exhibited. 5 relate to episodes of the novel, and 2 are decorative. The tapestries were made several times to furnish the Royal Palace of Caserta.
After 1870 they were then moved to the Quirinal Palace in Rome. One of the tapestries, which instead comes from the Capodimonte Museum, is evidence of French manufacturing.

Palazzo Reale is in Piazza del Plebiscito 1. To go to Palazzo Reale by underground (metro di Napoli), get off at Municipio (line 1) or Montesanto (line 2) stations.
The opening hours of the Royal Palace in Naples are from 9 to 20. The Royal Palace is closed on Wednesdays.
The cost of the entrance ticket is 10 euros. Some people can access it with a ticket at a cost of 2 euros. For more information, visit the official website palazzorealedinapoli.org