You are at:Home»Napoli»Duomo station finally open

The new Duomo station is part of the art metro station that you can visit in Naples.

Among the news of 2021 in Naples is the opening of the new Duomo metro station.

With the completion of Naples’ Duomo Station, one of the most beautiful stations in the world, Corso Umberto I is finally accessible again and it’s easier to get around this area of the city.

After nearly 20 years of work, the Duomo metro station on Line 1 has opened. You can access from Piazza Nicola Amore, right at the end of Via Duomo.

Hide
Duomo, a museum in a station
Timetables line 1

Duomo, a museum in a station

The completion of the Duomo station represents the last piece of the Garibaldi-Dante route, that is, from the main Napoli Centrale station in Piazza Garibaldi to the one in Piazza Dante. 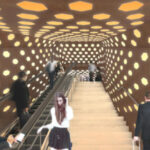 It is a very special structure, also used to house a museum containing archaeological finds discovered during the excavations for its construction.

In this area a monumental complex was found, built in honor of Emperor Augustus on the model of the Olympic Games, consisting of a Temple and a Portico with annexed structures, evidence of the Games that took place in Naples, considered at the time “the most Greek city in the West”, around the first century AD.

The glass roof of the floor at street level serves precisely to filter natural light into the area dedicated to the museum. The project is structured, as in the case of the other art metros, on several floors. Light is also important in the other areas of the metro station. In fact, as you enter you participate in a sensory game in which the lighting varies according to the influence of the Sun.