Pompeii, a town close to Naples, is known all over the world for the ancient ruins. Pompeii is on the slopes of Vesuvius, an active and very dangerous volcano.

During the Roman Empire, Pompeii used to be a holiday place for the nobles, as it has a beautiful seascape and a mild climate. There were many villas, amphitheaters, libraries, thermal baths, and public buildings. It was a delightful town overlooking the sea when a terrible eruption lambasted it. It was the year 79 b.C and the city was still under reconstruction due to an earthquake, when a violent eruption covered it with lava, ash, and lapilli. After this eruption, the ground had become so arid that for 1700 years no one remembered or built over ancient Pompeii. 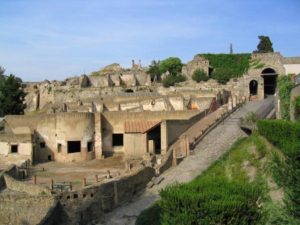 The first excavations were done during the reign of Carlo III di Borbone after the success of Ercolano excavations (Ercolano is another city destroyed by an eruption, close to Pompeii). From the outset, it was clear that the discovery of the city was an extraordinary archaeological event, because it was the largest Roman city ever found intact. In fact, the eruption had created a layer of lava and ash that had protected the town from all weather conditions for 1700 years. Today Pompeii has UNESCO World Heritage Site status and is one of the most popular tourist attractions of Italy, with approximately 2.5 million visitors every year.

The masterplan of Pompeii is the typical Roman city one, with the famous cardo and decumanus system, and a wall with seven gates. The archeologists found the remains of houses, villas, public buildings and recreational, fountains and temples and even a cemetery located outside the walls according to the Roman tradition. But the most spectacular thing is the discovery of many human bodies of people intent on their everyday affairs. In fact, when the eruption hit the city, few people managed to escape while all the citizens of Pompei were swept away by the lava at once.

Many buildings are worth visiting at the highest degree: the ” Villa dei Misteri”, the “casa del Fauno”, the “Foro”, the “mercato” and many more…

Here, in addition to visiting one of the most important archaeological sites in the world, you can breathe the air of the ancient Roman Empire; in fact, almost everything has remained as it was then. The terrible eruption that killed millions of people and swept away entire villages still allows us to know and learn more about our culture and our ancestors.