You are at:Home»Tours & Itineraries»Itineraries»My Brilliant Friend filming places in Napoli

If you are coming to Napoli, you may want to see with your eyes the places of season 1 and season 2, based on “My Brilliant Friend” and on “The story of a new name”.

If you don’t know anything about the series yet but you would like to know what’s the enthusiasm about, you can even listen to the audio-book on Audible. Maybe you will miss some of the fascinating sentences in the Neapolitan dialect, but you will listen to an intense story.

The actresses and actors and the fiction itself has been nominated and won many awards. Some examples are the Gotham Independent Film Award, the Critics’ Choice Television Award, the Peabody Award, and the Prix Italia.

Reading or watching “My brilliant friend” is one of the ways to know some of the most famous places in Naples. Also, some other places are less known, and following the path of the characters of the book/fiction may be a unique itinerary to follow.

Filming Locations from My Brilliant Friend

Rione Luzzati, and Sacra Famiglia Dei Padri Giuseppini church
Rione Luzzati is a part of the Gianturco district, not very far from the main station of Napoli. It is the place where all the main characters live. Also, in the same area, there is a church where Lila gets married. It is a beautiful baroque church which you can refer to as Sacra Famiglia Dei Padri Giuseppini. If you would like to go towards the sea, as the children do in season 1, you will see the tunnel that leads to the port.

Corso Umberto I
Do you remember the huge road where Lena and Lila’s husband, Stefano, go by car to the boutique where Lila bought her wedding dress? It is a big road named Corso Umberto I. Also this road is close to the main station in the city. Nowadays, you still find so many boutiques, shops, jewelers.

Port’Alba
Even if in the fiction they say that Lena work in a library in Mezzocannone, the street where they shot the library scenes has a different set. In the story of a new name fiction, Lena works in the Berisio library in Port’Alba, very close to Piazza Dante, one of the most important squares of the historical center of Napoli. Port’Alba is the mecca for who loves reading. There are books from all times and for all tastes!

Palazzo Gravina
Palazzo Gravina is one of the palaces where the students of the architecture department of the University of Naples Federico II go to follow their lessons. In the fiction, Palazzo Gravina is where Elena and Nino go to high school. The interiors and the cloister scenes are shot in Napoli university.

Seaside, and Posillipo
If you would like to see the shore where Elena takes the children of the stationer to take a bath in Summer, go to Posillipo. There, you will admire the beautiful Donn’Anna palace. It is a must-see of Napoli even if there are not so many people that go there! Plus, going to Posillipo or just going to the seaside of the city, you will admire the Vesuvius from the gulf. Just as Elena did when she went to the city with her father. 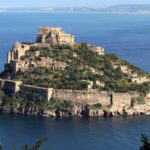 Ischia (island)
One last place to go, if you want to explore all the places where My Brilliant friend was shot, is not in Napoli but very close to it. It is the island of Ischia, where Lena go to work on season 1. Also, it is the very same island where Lena and Lila go during season 2 and meet Nino. Ischia landscape is unique: what you can see through television is just a pale impression of real beauty. 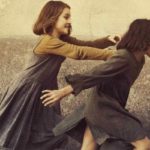 Even if the filming places of My Brilliant Friend and The Story of a New Name are mainly in the historical center of Napoli, you may feel lost by going there alone. That is why there are many proposals for organized tours about the book and the fiction by Elena Ferrante.

Here, we propose an Elena Ferrante tour. By joining this, you will cross all the places where you have seen Lila and Lena!