You are at:Home»Napoli»Where to admire Bill Viola in Naples

Until January 2023 it will be possible to visit the exhibition dedicated to Bill Viola in Naples.

Bill Viola, back to Life includes 5 video works by Bill Viola, specially selected by the Bill Viola Studio for the location. 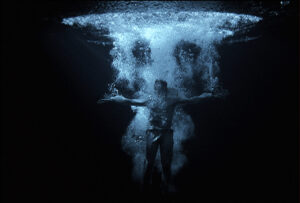 Inside the Church, reopened for the occasion and which can be fully appreciated during the visit, Earth Martyr, Air Martyr, Fire Martyr and Water Martyr (2014), derived from the large-scale permanent video installation Martyrs (Earth, Air, Fire, Water), inaugurated in London in 2014. Also present is Three Women (2008), part of the Transfigurations series, dedicated to the reflection on the passage of time and the process through which the interiority of a person is transformed.

Bill Viola, 1951, is one of the most important artists. In fact, it was instrumental in the affirmation of video as a form of contemporary art.
Viola’s video installations, total environments that envelop the viewer in images and sounds, use cutting-edge technologies and stand out for their precision and simplicity. They are exhibited in museums and galleries around the world and are found in many illustrious collections.
Viola uses video to explore the phenomena of sensory perception as a way to self-knowledge. His works focus on universal hu28man experiences – birth, death, the development of consciousness – and have roots in both Eastern and Western art, as well as spiritual traditions, including Zen Buddhism, Islamic Sufism, and Christian mysticism. . Using the inner language of subjective thoughts and collective memories, his videos communicate to a large audience, allowing viewers to experience the work directly and in a personal way.

Read more about What to do in Naples, Fall 2022