Have you ever heard the Italian saying “Il segreto di Pulcinella” (The secret of Pulcinella)?
This refers to Pulcinella’s inability to keep a secret. But who is Pulcinella?

Pulcinella is one of the most ancient, popular and funny Italian masks, the symbol of the Neapolitan people and traditions. It embodies the soul of Naples and of the Campania region. It was created in Naples during the second half of the XVI century by the actor Silvio Fiorillo. 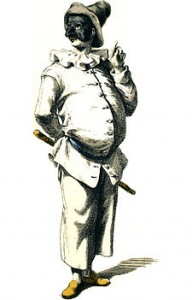 He wears a long white shirt and white trousers, black belt and shoes, a white sugar loaf hat and a black half-mask full of wrinkles, that together with a curved nose give him a funny expression. Pulcinella has a clumsy gait and a strident voice and gesticulates very much. He shows his feelings, sadness or happiness. In this case, the outlandishly dances, hops and shouts. As the Neapolitan lower classes, he takes life with philosophy and has an optimistic view of life, despite misfortunes and hardships.

He reflects the desire for revenge of the Neapolitan people against the oppressors and the powerful and at them, he is servile but mocking. Silly but clever, sometimes loser sometimes winner, ingenue but always capable to survive, sometimes vital sometimes melancholic. Pulcinella is funny but sad, spontaneous, crafty and witty, but also chatty, unreliable and gullible. He is always hungry, in fact, is often represented holding a plate full of spaghetti. As a matter of fact, it’s very difficult to give a complete description of Pulcinella because there are a lot of contradictions in his character.

This charachter has no limits, in fact it is also known overseas, since many Italian actors over the centuries emigrated to seek their fortune in various countries. Pulcinella became the most famous mask in the world: in England it is Mr. Punch, in France Polichinelle, in Spain Don Cristobal, In Germany Kaspar and in Russia Petrushka.